A Week of Windows 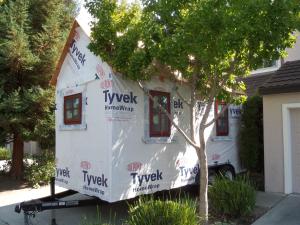 Over the course of the last week, we installed all of the windows in the tiny house. Rather than making a separate blog entry for each day, I thought I would just combine some excerpts from my journal to chronicle the process.

Yesterday was a fun day. After spending 2 months in the Philippines for work, I finally got to devote some time to my tiny house again. I started by going over to the RV lot to get the tiny house ready to move back to my driveway. I pulled the tattered tarp off the top of the house and moved anything inside the house that I thought might fall or roll around when the house was moving. The next thing I did was perhaps the most fun thing I have done in a while. I cut holes for two of the windows. I thought this might be more difficult, but it was actually quite easy. I just drilled holes in the four corners of the window and then used a jigsaw to cut them out. It worked really well and went really fast. When I was done, I suddenly had light and ventilation inside my house for the first time which was delightful. 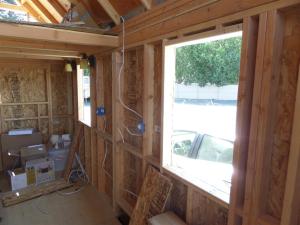 After that, my friends, Dave and Deb, came over and Dave helped me move the tiny house into my driveway with his truck. We put some house wrap on the side of the house where I had cut the windows out. Then, I went over to my friend Joy’s house to pick up his table saw. I think I now have everything I need to continue installing windows and probably even installing siding over the next week or so. 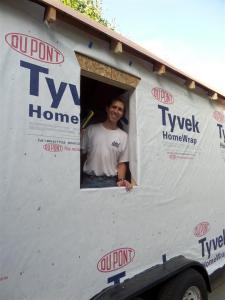 I had a really good and productive but tiring day today. Today, Sheila and I installed four windows into the tiny house. It may have been one of the most fun things I have done on the tiny house since the beginning. I’m not sure why it was so much fun. I think perhaps it was because having windows in the house just made such a difference in the way the house looks and feels. It doesn’t seem like a dark wooden box anymore. It is starting to look and feel like an actual home. 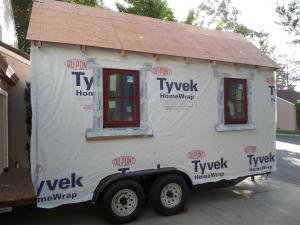 We learned quite a bit while we were installing the windows and we got progressively better at it as we went along. The first window took us almost 3 hours but all of the windows after that took less than 1 hour. I made up some window installation instructions that I’m hoping will be helpful for anybody else who needs to do this (or for me if I ever do this again). 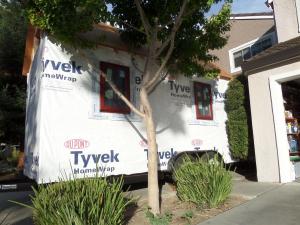 My uncle, Bill, is visiting from Massachusetts this week and has been helping me with my tiny house while he is here. Today, Bill helped me to install the two more windows in the tiny house, one in front and one in back. I also finished installing the all threaded rod through the stack of two by fours in the ceiling on the front wall. Those bolts were a little bit tricky because I had to countersink the nuts since they were inside the front window frames and I didn’t want the nuts to interfere with the windows. It took me four different drill bits to get the whole job done, but I think I just made the whole thing that much more satisfying when I finally completed it and everything came together perfectly. 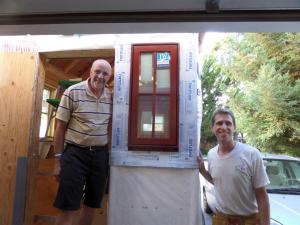 Uncle Bill and I by the Front Window 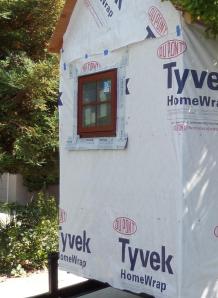 The Rear Window we Installed

I was only able to work on my house for an hour today. However, in that hour, my Uncle Bill and I were able to install the final window on the ground floor which felt great.

After Uncle Bill left this morning, I spent the rest of the afternoon working on the tiny house. At first, it was hard to get going. I have been working on the tiny house all week and I think that has left me a little more tired than I expected. However, once I began working, I started to get some energy back. I managed to install the plywood on the gables on both ends of the house, cut the holes for the windows in both gables and put the Tyvek on. After that, I drove to a hardware store I had never been to (Bruce Bauer Lumber in Palo Alto) before to pick up some stain for my siding. When I got home, I spent another hour or so painting a few different pieces of wood with different stain samples I had gotten from the hardware store to see how it would turn out. In the end, I decided I was most happy with the Penofin Ultra Transparent Western Red Cedar.

My friend, Adrian, and his two sons (my two tiny helpers) came over again today to help with the tiny house. It’s always great to see them. Adrian helped me to install the final two windows in the house. 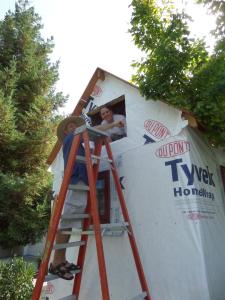 While we were working, Bryce and Anthony kept busy with my ever growing pile of blocks. 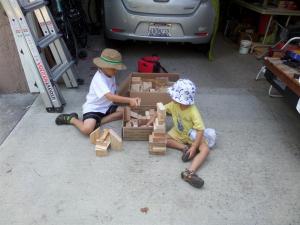 No Shortage of Blocks

When the novelty of blocks wore off, Bryce set to work its sweeping up all of the “pixie dust” (sawdust) in my tiny house. For some reason, Bryce loves doing that and I’m certainly not one to stand in his way. It’s always entertaining and helpful to have Adrian and his kids come over to help with the tiny house. After that, it was on to climbing ladders. These kids seem to be able to have fun with anything. 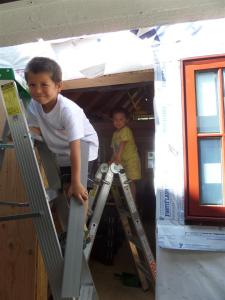 The last window we installed was my favorite – the Gothic window above the door. It took me a long time to figure out what to do with this window but now that it is in, I am very happy with how it turned out. The original window specified by Tumbleweed was rounded at the top and would have cost $2500! That’s over five times what this one cost me and I think this one looks even better than the original design. 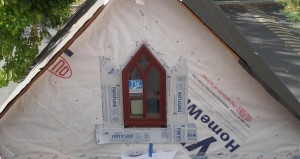 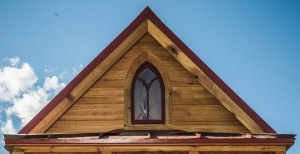 By the time Adrian and the kids left, I really wanted to get more done on the house, but had no energy left. I sat down on the floor of the garage and could barely get up. Eventually, Sheila and I decided it might be good to get some roofing paper on top of the house in case it rains this week. We eventually managed to get that done, but being on the roof of the tiny house is pretty difficult and doing so took pretty much all of the energy I have left.

I feel very good about our progress this week. It’s very nice to have all of the windows installed in the tiny house. However, I’m pretty wiped out. Tomorrow is Sunday and I am definitely looking forward to a day of rest. 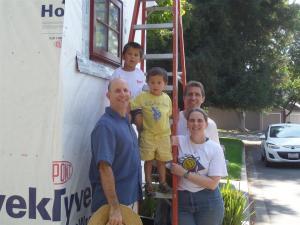 1 Response to A Week of Windows