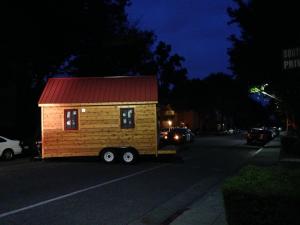 Failed Getaway Results with Tiny House In Middle of Street

Sheila and I were woken up this morning at 5:00 AM by our doorbell followed by a furious banging on our front door. Sheila got up, opened the office window over the front door and asked the guy standing there, “Can I help you?” At which point the guy answered, “Somebody is stealing your tiny house! It’s on the other side of the housing complex!”That was more than enough to get our attention. I threw some clothes on, put on some shoes and grabbed the car keys. Meanwhile Sheila found out from the guy that the cops were already there and involved. We ran out the door, got in the car and started driving. I didn’t even know which direction to go. Luckily, we picked the right direction and did not have to go very far. We only got to the edge of the complex before we saw our tiny house sitting in the middle of the street outside our townhouse complex, completely blocking traffic and surrounded by police cars. The thieves cut the Trimax Umax100 Trailer Hitch Lock off the front of our trailer and successfully drove it off of our driveway where we had been working on it for the past few weeks. However, they had not done a good job of hooking my tiny house up to their vehicle and the house flew off of the truck as the thieves exited the complex, skidding to a halt in the middle of the street.

By some miracle, nobody was injured and no serious damage was done to either the house or any nearby property. The house could have easily slid into either or both of the two cars parked on the side of the street, but it didn’t. The trailer of the tiny house could have been seriously damaged beyond repair, but it wasn’t. The only damage I could find was that the winch that lifts the tongue of the trailer got bent as the house slid across the street. The winch still works. It’s just a little bit bent. I think I can take the trailer back to Orlandi Trailer where I purchased it and get bent back straight and re-welded.

We might have lost the house altogether except for our neighbor, Will, who lives a few houses down. Evidently, there have been a bunch of vehicle break-ins and other thefts throughout the complex over the past few months. In response, Will purchased some cheap outdoor cameras at Fry’s to do his own security monitoring. This week, for some unexplainable reason, he felt it was necessary to stay up all night, watching TV and monitoring the cameras. For some other unexplainable reason, the thieves decided to drive past my house and pull into the driveway next-door to Will’s house while they contemplated what they were going to do. If they had stopped and pulled into a driveway even one house closer to us, they never would have been seen at all. However, when Will saw somebody pulling to his neighbors driveway at 4:30 AM, he knew something was wrong. He then had the courage to go outside and follow them, unseen, as they drove back to my house and hooked their Toyota pickup to my tiny house. When the thieves started pulling the tiny house out of the driveway, Will started yelling and screaming at them at which point, they peeled out and drove out of the complex as fast as possible with my tiny house in tow. Will then chased them down the road on foot while calling the police. My guess is that their tiny pickup had the wrong size ball for my trailer so they could not hook onto it properly. The house finally broke free from its captors as they went over the dip at the exit of the complex.The police called a tow truck to get the tiny house out of the road. The tongue of the trailer was so close to the parked cars on the side of the street that the tow truck driver had to hook a chain to the tongue of the trailer and drag the whole house about 15° around so he could hook his ball up to the trailer. It was painful for me to watch him get ready to do that, but he was very gentle about it and did no further damage to the trailer in the process. After that, he was nice enough to pull the house around and back it into our parking spot in the RV lot of our complex. I think it will stay there until I have the tongue fixed and have some better method of keeping it safe.

Safe and Sound Back in RV Lot

Needless to say, I’m a little bit off-balance and stressed about almost losing my house this morning. However, I’m also extremely grateful that we still have it. It’s incredible to me both that Will happened to be staying up all night monitoring activity in the complex on exactly the night that this occurred, and that for whatever reason, the thieves decided to park in the driveway next-door to Will before trying to steal my house. What are the chances of that? I am convinced this is not an accident. I know God was somehow involved and I’m extremely grateful to both God and to Will for keeping our tiny house safe.

PS: I also had an interesting conversation with God about this whole incident. If you are interested in reading that, click here.

This entry was posted in Security and tagged police, theft, tiny house, towing. Bookmark the permalink.

6 Responses to Tiny House at Large